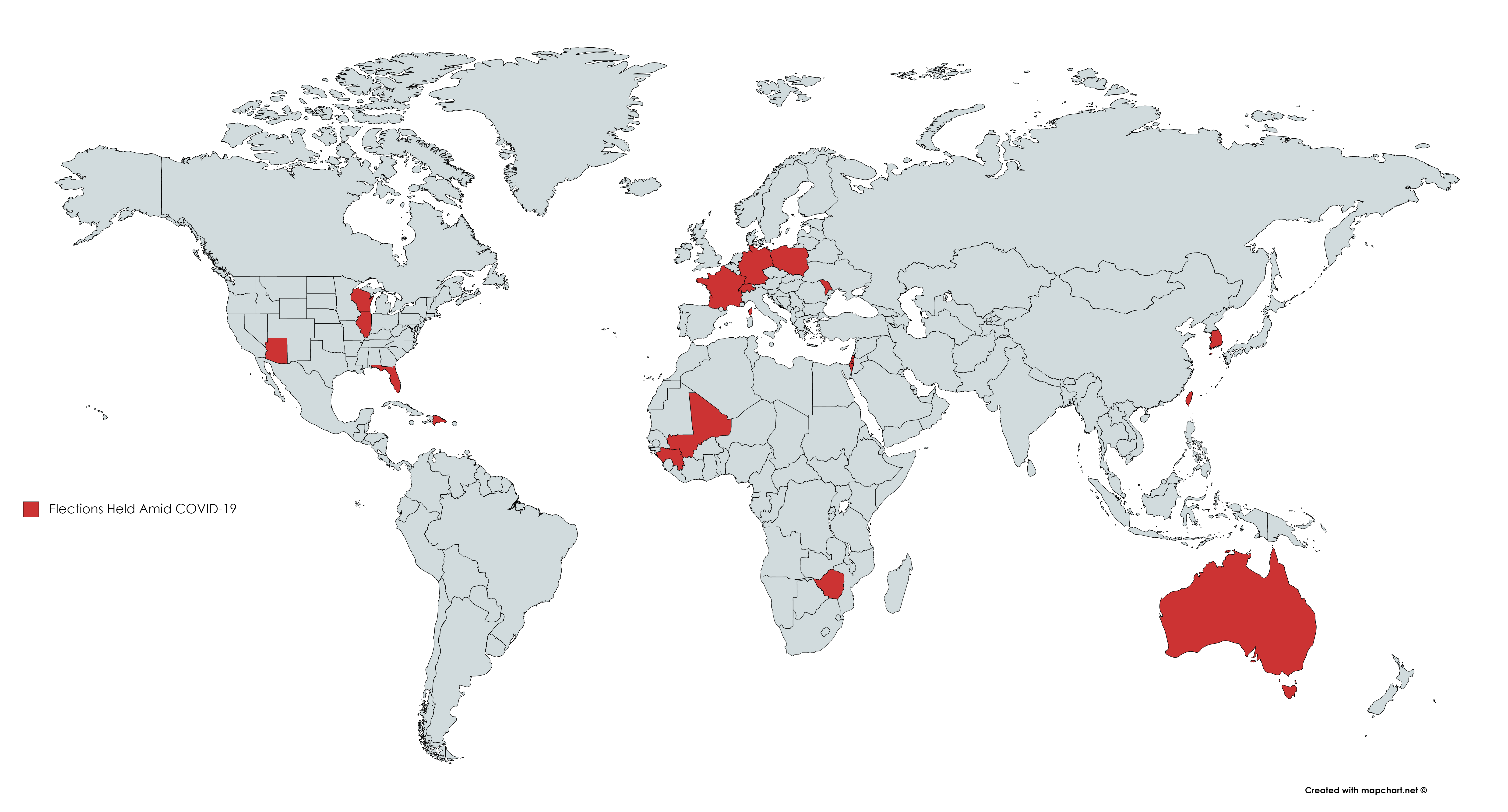 This list focuses on some of the measures election management bodies (EMBs) around the globe are using when holding electoral activities amid COVID-19. The International Foundation for Electoral Systems (IFES) has not analyzed these mitigating measures for their effectiveness or desirability. Please contact IFES at ElectionGuide@ifes.org if you know of additional mitigating measures or believe any data in this resource to be inaccurate.

On March 14, France introduced significant restrictions to curb the spread of COVID-19, such as banning gatherings of over 100 people, closing schools and nonessential shops and suspending sporting events. However, France continued to hold local elections on March 15.

Proxy voting is permitted in France. To request proxy voting, voters must apply in person at their respective area’s police station or first-instance tribunal. However, due to COVID-19, specific categories of persons were allowed to request that the police come to them:

These measures were taken to protect voters and to bolster turnout.

The French government issued guidelines to polling stations recommending that voters remain at least one meter away from each other at all times. The interior minister also “asked voters to bring their own pens, to avoid transmitting the virus that way”[2]. An official communiqué issued by the interior minister before the election on “the organization of municipal elections during the COVID-19 epidemic”[3] included provisions on:

The communiqué also states that any voters who refuse to use disinfectant gel when entering the polling station cannot be denied the right to vote, and that a voter who is sick cannot be denied the right to vote if he or she is wearing a mask and has washed his or her hands. The communiqué does allow the polling station president to remove a voter if he or she disrupts electoral operations by making threats or creating risks related to COVID-19.[4]

BBC reports that in the town of Lamorylay, the polling station featured “metal railings creating closed lanes inside the room, and copious amounts of black-and-yellow striped tape on the floor”[5] to mark where voters must wait in line.

Fear of infection arguably contributed to the historically low voter turnout: dropping from 63.5 percent in 2014 to around 46 percent in 2020.[6] On March 17, President Emanuel Macron announced the delay of the second round of elections, which were to be held on March 22, a decision, he argued, was made to “reconcile public health and democracy.”[7]. The government has asked Parliament to extend the current mandate of council members and mayors.[8]

On March 11, the Moldovan Central Election Commission published and submitted a Circular Letter in compliance with the provisions of the NEPHC Decision of 10 March 2020, which involves prohibiting gatherings of more than 50 people and requires disinfecting all polling station areas.[9] According to Promo-Lex OM election observers, “electoral bureaus were equipped with the necessary minimum articles used for hygienic purposes.”[10]

During the Chegutu War 2 by-elections, Zimbabwe had just one officially recorded case of COVID-19, and President Emmerson Mnangagwa declared the coronavirus pandemic a national disaster.[11] However, the Zimbabwe Election Support Network (ZESN) reported:

“There were no preventative measures put in place for voters, polling officials, political party agents and observers, such as hand sanitizers or water and soap to wash hands. At Rifle Range polling station, one voter refused to place his finger on the table to get his finger marked with an indelible marker citing that it was unhealthy given the COVID-19 scare.”[12]

Guineans voted in a controversial constitutional referendum and for a new Parliament amid protests and election violence. In response to COVID-19, some polling stations required voters to wash their hands before casting their votes, and radio stations reminded citizens to maintain their distance from other voters.[13] However, Reuters reports that the large turnout resulted in crowds being “squeezed in line to vote.” At the time of the referendum, only two cases of COVID-19 had been recorded in the country.

According to reports by APTN, the polling place in Shoal Lake 39 looked “more like a COVID-19 testing center than a place where you cast a ballot for chief and council.” Voters were asked to use hand sanitizer upon entering and leaving the polling station, and “only two voting members were allowed in the station at a time with signs warning them to keep two meters apart.” Voters were handed a ballot

through a “cut out slit in plastic just big enough for the envelope,” which served as a protective screen for poll workers[15].

The southern region of Bavaria held first-round local elections on March 15. Election workers wore gloves, and many voters brought their own pens to the polls. The following day, Chancellor Angela Merkel enacted “radical measures” to curb the spread of coronavirus.[16]

Bavarian Prime Minister Markus Söder and Interior Minister Joachim Herrmann announced that the March 29 run-off election would only take place by postal vote. Hermann instructed affected municipalities to immediately prepare postal voting materials, and stated that “no separate application for postal voting would be necessary, even if a voter cast his vote in the polling station during the first ballot.”[17] This decision was made in response to the COVID-19 pandemic as an attempt to minimize the risk of contagion in the region.

Mali held long-delayed parliamentary elections on March 29, after President Ibrahim Boubacar Keita assured the country that a “scrupulous respect of health measures” would be observed.[18] Reuters reported that turnout in the capital appeared low in the morning. Lines were short, allowing voters to cast their ballots while maintaining distance from other voters. Handwashing facilities were meant to be available, but kits arrived late[19].

In Australia, the New South Wales government delayed its local government elections. However, the Queensland Electoral Commission of Queensland (ECQ) decided to continue with its scheduled elections.[20] Voting is compulsory in Australia and a $133 fine can be imposed on violators, a regulation that was not amended in the wake of the COVID-19 pandemic.

The ECQ came to this decision:

“On the basis that: the elections facilitate an essential service by providing for continuity of democratic representation for Queenslanders; and measures will be put in place at polling places to limit the number of people inside the building to fewer than 100.”[21]

The ECQ published a list of COVID-19 protection measures and resources ahead of the election, including:

The ECQ instituted a telephone voting system for a limited number of at-risk voters. However, this service was beset by issues as a reported 19,000 voters had registered for this service.[22] Mail-in voting was permitted; however the deadline to request a mail-in ballot was March 16.

The National Election Commission (NEC) had to urgently devise safeguarding measures against COVID-19. In addition to mandatory masks and gloves, voters will also be checked for temperature and sprayed with hand sanitizer when they show up to cast ballots.[23] Some confirmed or suspected COVID-19 patients will be allowed to vote from home or hospitals via mail-in or absentee ballots.[24] The NEC has confirmed that 14,330 polling stations will be set up for the elections to increase voters’ access to polling stations.

In addition, a voter code of conduct has been established. Banners have been placed around the country to inform voters of the measures that will be put in place in polling stations, and the information will be posted inside polling stations. The Code of Conduct has five key parts:[25]


The NEC has committed to cleaning all polling stations prior to opening and will thereafter disinfect polling places at regular intervals during Election Day. The NEC tested out these quarantine steps at over 3,500 polling locations during early voting.[26]

The NEC has closed polling stations in 40 countries with major COVID-19 outbreaks, such as the United States, Italy and Germany. These eligible voters will not be able to vote, as South Korea does not allow mail ballots for those overseas.[27] This impacts more than 87,000 citizens, or about half of eligible voters living outside of South Korea.

While the NEC has suspended the International Election Observation Program for the elections, they have since announced that individuals will be able to observe the election remotely. Observers can watch early voting and counting on Election Day live on YouTube. The elections livestreaming schedule can be found here. The NEC will also be producing a summary video of the election, scheduled to be posted on May 1.[28]

The NEC has published various videos and images that explain the voting process for both voters and the media covering this election as part of a larger public information campaign.

On April 6, Polish lawmakers voted to conduct the upcoming presidential election exclusively through postal voting.[29]  The country will not open any physical polling stations; rather voters will deposit their ballots in special post boxes in their local areas.[30] Previously, only Polish citizens over the age of 75 or those with certain medical conditions were eligible to vote by mail.

The Malawi Election Commission (MEC) has announced that there will be “masks, gloves, water and hand sanitizers for use” throughout polling places. Further, there will be strict observance of distances between individuals as well as gatherings of less than 100 people during meetings.”[31]

The MEC has indicated that compliance with the election calendar will depend on the impact of the pandemic on processes – travel embargoes and shutdown of companies producing electoral material – and further measures needed to mitigate the spread of the virus.

The New Zealand Electoral Commission is continuing with its preparations for the September election and referendums while looking at additional measures to safeguard the health of voters and election officials if the COVID-19 pandemic is still a risk. The commission has created a COVID-19 and the 2020 General Election page on its website to post information and updates. It outlines contingency planning efforts, existing alternative voting methods and how the election date could change. Further, the commission has committed to informing voters if any changes are made via their website, social media channels and in their election advertising.[32]

On March 23, the Election Commission of Pakistan (ECP) postponed the April by-elections to vacant Provincial Assembly seats due to the COVID-19 crisis.[33] According to a directive issued by the chief election commissioner on March 24, the ECP has taken additional steps to mitigate the spread of COVID-19:[34]

As the coronavirus spreads across the U.S., many states have postponed primary elections and expanded vote-by-mail options. Other states have continued to hold in-person elections amid the COVID-19 pandemic, taking various measures to safeguard the health of voters and election workers.[35]